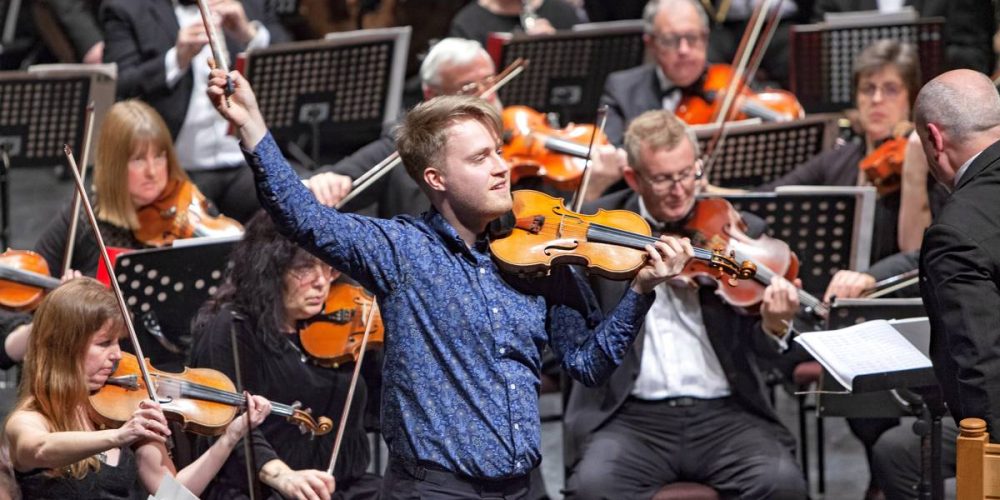 The Isle of Wight Symphony Orchestra, under the baton of conductor Johnathan Butcher, opened the new year on Saturday 22 January at Medina Theatre, blowing away the cobwebs with some lively dances from Croydon to Bohemia, and a breath-taking performance by Charlie Lovell-Jones . The young violinist, recognised as one of the most promising of his generation to emerge internationally, joined the orchestra to perform a neglected concerto by Samuel Coleridge-Taylor. Most famous for his oratorio, Hiawatha, Coleridge-Taylor was a black British composer born in Croydon in 1875. The parts for his Violin Concerto were believed to have been lost with the Titanic when they were sent to the USA in 1912. Although they turned out to have been mislaid, Coleridge-Taylor died later that year, never having heard it played. Largely forgotten until the late 20th century, 110 years later, it received its Island premiere tonight.

Lovell-Jones clearly adores the piece and his performance was electrifying for both audience and the orchestra. The piece is awash with the most glorious tunes which Lovell-Jones played lovingly, his phrasing bringing out the soaring lyrical theme in the first movement and the sprightly joy in the dance theme which follows. In the slower second movement, his playing of the heart-achingly tender tune was like pouring honey, never tipping into the sentimental and bringing out the rich tones of the 1777 G.B Guadagnini violin on which he plays. The final movement features a complex, syncopated dance tune, brought to life memorably by his skillfully articulated playing. Soloist and orchestra were at one throughout, with Lovell-Jones joining in the orchestral violin parts to share his evident love of the piece with the players.

It was quite the night for lovers of Croydon, as the orchestra opened with Malcolm Arnold’s The Fair Field, written in 1972 to mark the tenth anniversary of the opening of the town’s Fair Field Halls on the site of a former market fair. The piece opens with a woozy, slightly drunken waltz reminiscent of a carousel, which the strings communicated wonderfully. Market trader-like calls interjected by wind and brass and the general growing riotousness was clearly enjoyed by orchestra and players alike.

The second half featured a performance of Dvorak’s 6th Symphony in which the orchestra’s well-blended playing and opulent sounding strings brought alive the rich tunes. Solos and duets in the wind and brass came through the texture well in the slow second movement, in which Jonathan Butcher’s characteristic magic dust was sprinkled judiciously. In the third, the orchestra brought the lively Slavonic dance to life with sensitive dynamics. Rounding off the evening with a joyous finale theme, the orchestra drove towards the triumphant ending of a wonderful concert.