The Isle of Wight Symphony Orchestra (IWSO) is the only orchestra to bring a regular programme of classical music to audiences on the Island. It is run by its members on a voluntary basis and is formed of professional and retired professional local players, music teachers, students and strong amateur players. In order to cover the repertoire, the Orchestra regularly engages professional players to play with it. The quality of performances and the popularity of programming have built audiences over the last 5–10 years so every performance is usually sold out and there is a waiting list for season tickets. Much of this is due to the high expectations, careful rehearsal and inspired programming by Musical Director, Jonathan Butcher, who celebrates 25 years with the Orchestra in November 2022.

The Orchestra has earned a reputation as an ensemble that works well with emerging international soloists. Many of the most talented young soloists regularly travel down to perform with us and many keep returning to the delight of our audience. The list reads as a Who’s Who from BBC Young Musician of the Year finalists, international competition and prize winners who have all performed with the greatest orchestras in the UK and across Europe in all the major concert halls. Bringing this quality of soloist to Island audiences at affordable prices is one of our major objectives as an orchestra.

Another key objective for the Orchestra is to serve as a seed-bed for talented local players who progress from the Isle of Wight Music Centre. Many of these go on to become full members and make up the future of symphonic music on the Island. Others go off to music college or University with a very strong apprenticeship in orchestral playing under their belts.

As well as great symphonic music, the Orchestra programmes an annual concert of shorter, often well-known pieces around a theme, for example Last Night of the Proms, Festival of the Sea, American Independence Celebrations or Movie Themes. These more relaxed concerts are a perfect introduction to orchestral music for younger audiences as well as those who just enjoy a great tune.

The Orchestra often joins forces with other local ensembles to perform larger-scale, often choral music. Over the years this has brought some very large pieces to the Island, seldom heard outside of large cities—Britten’s War Requiem, Elgar’s Dream of Gerontius, Vaughan Williams A Sea Symphony—as well as providing players for local choirs and events.

Thanks to sponsorship from Wightlink, the loyalty of its audience and the commitment of its members, the Orchestra remains in a healthy state. Having weathered the storm of COVID-19 which forced us off the stage for over a year, we are very much looking forward to moving ahead with our commitment to providing high-quality symphonic music,, bringing talented soloists to Island audiences, offering a progression route for young Island orchestral musicians, supporting other local ensembles and delivering an annual, more relaxed orchestral experience. 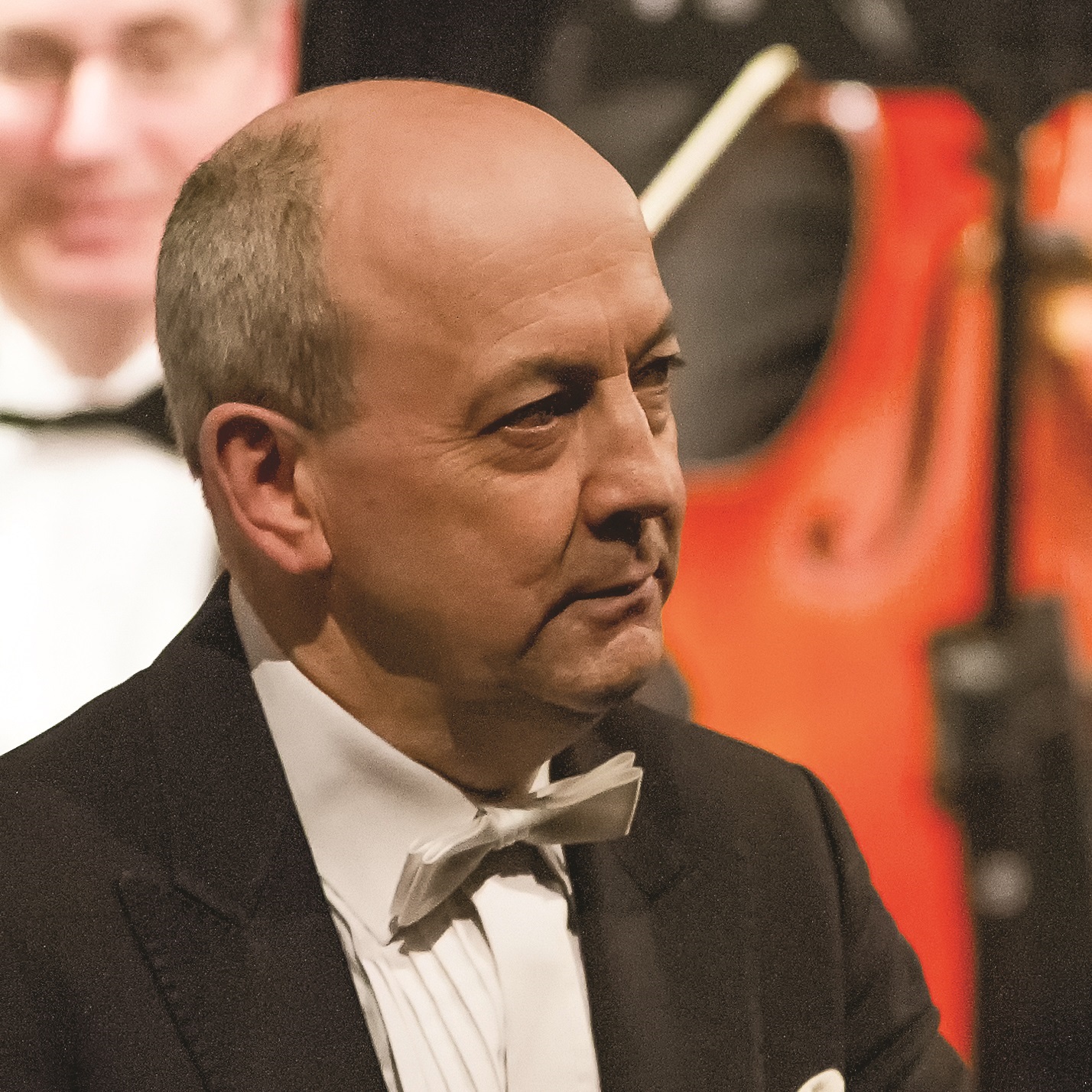 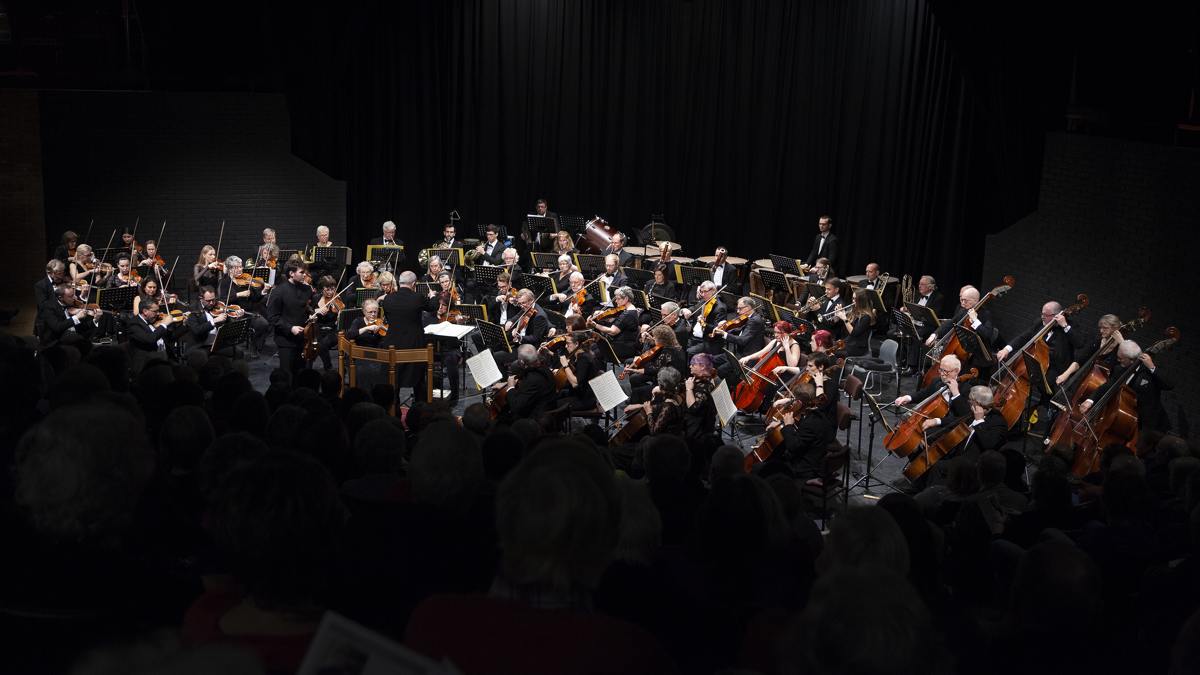 Jonathan Butcher is an experienced and versatile conductor, whose repertoire not only encompasses all the major orchestral, choral and operatic works but also includes a large selection of both 20th and 21st Century compositions. He has a particular passion for the chamber orchestra repertoire and is much admired for his work with young people and students, most notably as conductor of the Bromley Youth Symphony Orchestra. Jonathan also conducted orchestras at the Royal College of Music for some twelve years.

Whilst studying at the Royal College of Music, where he was awarded a Foundation Scholarship, he won all the major conducting prizes, including the Sir Adrian Boult Conducting Scholarship (on three consecutive occasions), The Arthur Bliss Prize and a Leverhulme Studentship for further study, which he utilised to attend the Tanglewood Summer School in the USA. His teachers have included Leonard Bernstein, Jan Stulen, André Previn, and Seiji Ozawa, but his major influence and inspiration was the great Strauss scholar and a recognized authority on the orchestra, Norman del Mar.

Jonathan has worked with many orchestras and ensembles, including the London Mozart Players, Royal Philharmonic Concert Orchestra, English Symphony Orchestra, New London Orchestra, Guildford Philharmonic Orchestra, National Centre for Orchestral Studies, Divertimenti, London Bach Orchestra, Promenade Orchestra of Radio Hilversum in Holland, Surrey Sinfonietta, National Orchestra of Malta and the Staatsphilharmonie Rheinland-Pfalz. On the lighter side he has conducted two Hoffnung Concerts in Munich and in 2004, Jonathan conducted several New Year concerts in and around Ludvigshaven, Germany. He also conducted the Family and Prom style concerts at the National Trust house, Polesden Lacey, for many years. At present, Joanthan holds musical directorships with four orchestras and is Artistic Director of Surrey Opera, with whom he has conducted and directed many acclaimed productions. Jonathan also teaches choral singing at the Royal Academy of Art and is a member of the Royal Society of Musicians.

Recent musical activities include the World Première of Madeleine by David Hackbridge Johnson, for which Jonathan also constructed the libretto. He returned to the world-famous Minack Theatre in Cornwall with a new production of Don Giovanni.

Festive Overture – Dmitri Shostakovitch Cello Concerto in B minor – Antonin Dvořák Soloist: Richard Harwood A London Symphony – Ralph Vaughan Williams The season kicks off with Shostakovich’s high-spirited Festive Overture, a buoyant six-minute curtain-raiser that was composed in just two days! Written about a year after the death of Stalin, this is not the dull grey music of socialist oppression but a brilliant effervescent work that moves from its portentous opening to its bubbling Presto with ease. Our guest soloist, Richard Harwood, makes a welcome the return to perform Dvořák’s Cello Concerto. Since he last played with us Richard has become principal cellist of the Royal Philharmonic Orchestra. The concerto is one of the classics or the repertoire and was written 1894/5 towards the end of the composer’s successful stint in the United States. In 2022 we celebrate RVW150, the 150th anniversary of the birth of one of England’s greatest composers, Ralph Vaughan Williams. A London Symphony was composed in 1913 although the score was lost and had to be reconstructed from a set of parts. The composer revised the score substantially in 1920, and then again in 1934. The suggestion that the composer write a symphony on […]

Guest conductor: James Thomas Overture to Hänsel & Gretel Englebert Humperdinck Piano Concerto No.2 in C minor Sergei Rachmaninov Soloist: Thomas Luke Symphony No.2 in D Jean Sibelius Humperdinck was asked by his sister, Adelheid, to write four songs for her children’s holiday puppet show, based on her own adaptation of the Brothers Grimm fairy tale, Hänsel und Gretel. Humperdinck went on to create an entire opera, and the conductor at the premiere was none other than Richard Strauss. It quickly became a beloved Christmas family tradition in Europe, similar to Tchaikovsky’s Nutcracker. The young pianist Thomas Luke is no stranger to Isle of Wight concert-goers, and was the winner of the piano final of the 2020 BBC Young Musician competition. Widely praised for his exceptional musicality and depth of interpretation, Thomas will be performing the Rachmaninov Piano Concerto No.2 in C minor. With guest conductor, James Thomas, at the helm the concert will culminate in Sibelius’ Symphony No.2 in D. The work is sumptuous, lyrical and powerful in equal measure. 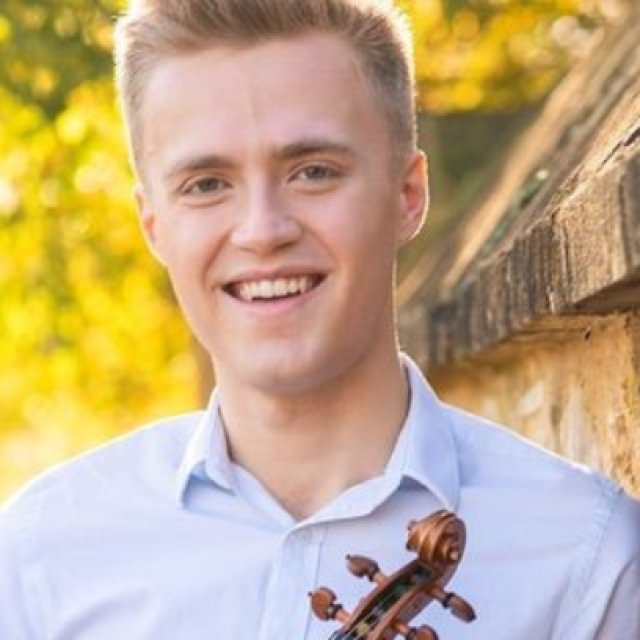 Hungarian Rhapsody No.2 Franz Liszt Pavane pour une infante défunte Maurice Ravel Violin Concerto in A minor Alexander Glazunov Soloist: Charlie Lovell-Jones Scheherazade Nikolai Rimsky-Korsakov Liszt had a strong interest in Hungarian folk music and absorbed its influences in some of his own music. The best known of his folk inspired works are the Hungarian Rhapsodies. The Hungarian Rhapsody No.2 in C minor is the best known of the set. To achieve its folk flavour, the Rhapsody is set in the form of a czárdás, a Hungarian dance that is traditionally laid out in two sections, one slow and one fast. Ravel’s Pavane pour une infant défunte was originally a piano piece. Written whilst still a student, it was dedicated to the Princesses de Polignac (previously known as Winnaretta Singer, of the sewing machine dynasty) who was known for hosting musical soirées and probably attended by Ravel himself. The orchestral version was premiered in Manchester in 1911, where the conductor was Sir Henry Wood. After Charlie Lovell-Jones’s electrifying playing in last season’s rendition of Coleridge-Taylor’s Violin Concerto it was inevitable that he would be asked to return as soon as possible. We did not have to wait long. This time […] 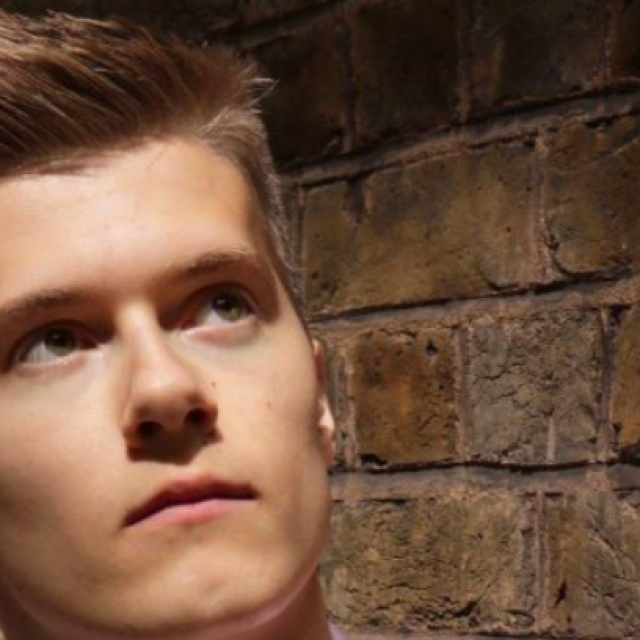 Variations of a Theme of Haydn (St. Anthony) Johannes Brahms Oboe Concerto in D Richard Strauss Soloist: Fergus McCready Symphony No.3 in D (Polish) Pyotr Tchaikovsky Brahms borrowed the theme for his Variations of a Theme of Haydn (St. Anthony) from an unpublished divertimento for wind by Joseph Haydn, unaware that Haydn had already borrowed the melody ‘Saint Anthony Chorale’ from elsewhere. No-one knows for sure who the original composer was but French composer Ignaz Pleyel has been named as a possible suspect. Of course, the title given by Brahms remains in common use. It has a the theme followed by eight variations and a robust finale. Strauss wrote his Oboe Concerto at the age of 81 and, as he got older, he was increasingly drawn to Mozart as a compositional model even though he used a completely different musical language steeped in late romanticism. The concerto can be seen as a re-interpretation of the classical concerto model, written for small Mozart-sized orchestra, which incorporates elements of the baroque concerto grosso (where the flute, clarinet and bassoon form a concertino with the soloist. We are delighted to introduce Fergus McCready as soloist, joining the IWSO for the first time. While […] 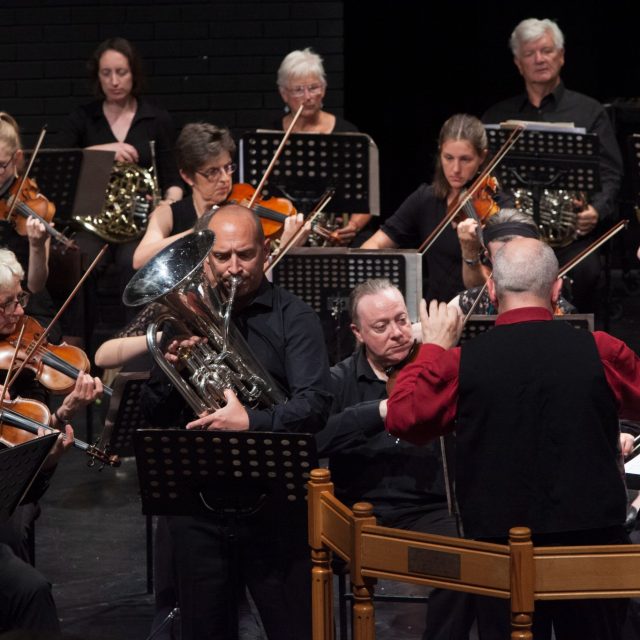 Overture to Die Fledermaus Johann Strauss II Sheep May Safely Graze Johann Sebastian Bach Soirées Musicales Benjamin Britten Symphonic Dances from West Side Story Leonard Bernstein Little Suite No.1 Malcolm Arnold A Tribute to the Queen Mother Jonathan Dove The Four Centuries Suite Eric Coates The season finale, like several years past, offers a varied selection of classical favourites plus a few items that may be new to some. Strauss the younger’s most popular stage work, Die Feldermaus (The Bat), is best characterised as a romp – a husband sentenced to prison stops by a party on his way to jail, finds his wife in the company of an overly-attentive companion, and craziness ensures. This overture is a potpourri of several of the operetta’s principal tunes. Sheep May Safely Graze was originally an aria from Bach’s secular Hunting Cantata. It isn’t about sheep, it’s about the subjects of one Duke Christian of Sachsen-Weissenfels, a man of big ambition and, by all accounts, an ego to match and flattering royalty never did a composer any harm. In 1935 the young English composer Benjamin Britten started to work for the GPO Film Unit, mainly writing incidental music for promotional documentaries. For one […] 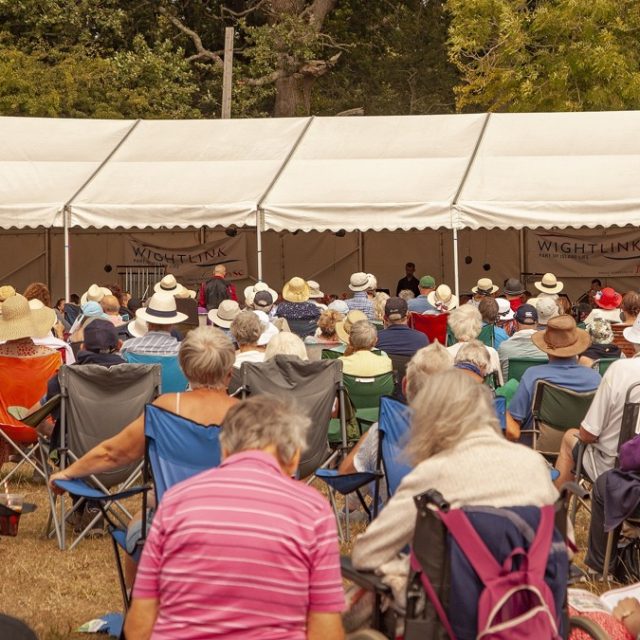 The Isle of Wight Symphony Orchestra returns to the Island Steam Railway, Havenstreet on Saturday 29th July for what promises to be a fantastic Saturday afternoon of musical entertainment. The concert will commence at 3.00pm, and will feature classical, film and TV favourites, yet more train-related music and our tribute to The Last Night of the Proms, where the audience always sings along to Land of Hope and Glory, Jerusalem and Rule Britannia! The outdoor concert starts at 3pm – but please remember to bring your own seating. A bar and refreshments will be available. Ticket combinations, including steam train journeys, will be available to purchase from the Isle of Wight Steam Railway at the beginning of the 2023 season.